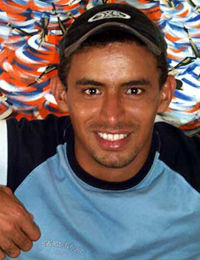 Rubens Andrade's young daughter, Leticia, is a prodigy at three who has already begun sketching her own colorful brand of art….

Rubens Andrade was born in Rio de Janeiro in 1972 and started working the art market of Ipanema at the age of 12. During this period, he teamed up with a friend, painting and selling their original pieces. While he had been working on small canvases and also making sculptures with paper maché since his early childhood, it wasn't until he was 17 that he began painting full canvases under the tutelage of Dino Castelli, another artist featured by Novica. Gradually, Andrade developed his own style driven by movement and packed with expressive brush strokes and exuberant color.

Now married with a young daughter, Leticia – a prodigy at three who has already begun sketching her own colorful brand of art – Andrade is able to support his family entirely from the money he earns from his paintings. The young father enjoys reading about the history of art and culture in his free time and also has a keen interest in geography. He is thoroughly excited with the prospect of selling more of his work to people around the world and is grateful for the opportunity to further his career based on his success with Novica.