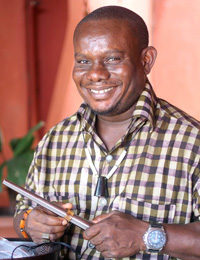 In Memory of Collins Amanatey Korle

'I craft each bead I use for my jewelry by hand and string the beads into necklaces and bracelets.'

"In Memory of Collins Amanatey Korle" is a beautiful collaboration to preserve the artistry of Collins Amanetey Korle as well as to benefit his family. But the truth is that we’re still devastated – his death could have been prevented had he not been refused treatment. We all rallied in his support – including some of you NOVICA customers – in different ways and from different corners of the world. We created a GoFundMe page to raise funds for his much needed dialysis. NOVICA artisans collaborated by handcrafting his jewelry – we provided the materials, and sometimes artisans used some of their own materials - when Collins was too weak to work and provide for his family.

Then, suddenly, there was a problem with the dialysis and the procedure he required to save his life was denied because he didn't have the $300 needed for the procedure, which is nearly the equivalent of one month’s average salary in Ghana. It was the middle of the night, banks were shut. Kwabena Darko, director of NOVICA West Africa, would have provided the money when the banks opened. Hospital staff didn’t believe it – did they even care? We are all very angry – they let Collins die.

In Collins honor, we are trying to transform our anger into something beautiful – as beautiful as his jewelry designs. The artisans that came to his aid in life are now committing their time and effort to continue his work – to preserve his legacy for his children, 6 year old Kingston and 4 year old Candella.

And NOVICA is donating 25% from every purchase to an education fund created for Kingston and Candella. We believe this would make Collins happy, especially knowing his kids will be provided for in some measure.

This is what Collins told us about himself, when he joined NOVICA:

"I was born into a family of artists and was trained by my father to make jewelry using natural materials such as bone and horn. My name is Collins Amanatey Korle and I'm from Ada Foa the Greater Accra Region of Ghana. I have been making jewelry since 1994.

"My formal education was in electronics however, I had more interest in the arts so right out of school I joined the family workshop and worked with my father for eight years. I have a natural talent for the craft and as I spent more time with my dad in his studio my interest increased. I was intrigued by creating something out of nothing. I also wanted to pursue and build on what my father had started.

"Learning the craft to master it required patience and being attentive to details. Over the years I have acquired an eye for art and accuracy. My favorite thing about my craft is creating something new and I draw inspiration from nature and my surroundings. I use natural materials like bone and horn sourced locally from domestically bred animals.

"I set up my own workshop when I got married and had to relocate. Initial challenge faced in setting up on my own was acquiring a shop, tools and machinery. I had to take a loan from family and worked my way to pay it up. Although I now work independently, I still visit my Dad’s shop to share ideas on the trade and new techniques.

"I currently have a staff of two and have trained over six people who have moved on to establish their own workshops.

"I craft each bead I use for my jewelry by hand and string the beads into necklaces and bracelets. I sell at local fairs and through other artisans. I also supply other artisans with the beads I produce as raw materials for use in the different items they produce.

"I am often described as a loving, responsible and fun person to be with. I am married with two kids and I like to hang out with my family watching movies. Aside art and jewelry, I am passionate about soccer and I played for a local team a few years back. Although I hung my soccer boots many years ago, I still passionately follow the team and other local teams like Hearts of Oak, and internationally I support Barcelona Football Club.

"My hope for the future is to teach more people so that my skill can be passed on for generations. I currently teach three people. I also plan to learn more techniques and develop more skills to improve my craft."

26 items by In Memory of Collins Amanatey Korle

The bracelet I received is much nicer (colorwise) in hand than the one shown in the website photo. I was interested in the more earthtone colors with a little black, and that is what I got. I do not have any of the grey color mentioned in the website description, and I preferred none. So be aware that the coloring can vary. The one issue with this bracelet is that for me (small wrists) it is really large, and it was my fault for not reading that the size was measured by the inner diameter, not the outer. With stretch bracelets that should be easy enough to remedy by removing a couple beads, which can be used in other projects. The beads are all symmetrical in size and finely polished to a shine. The brown and tan colors with some black truly makes this bracelet look right out of Africa. Besides that this purchase supports the family of the original artist who created the design who has passed away. This style is also available in black if a solid color is preferred.

This is definitely a go to ring I will wear often. Very understated and goes with everything!

Love these earrings! Got a black and brown pair, love the length.

I love the natural variation of the tear drops. Also glad to support the memory of this artist.

It wasn?t full enough. It was missing one slot

"Very happy with the items purchased."

Very sad to know he has passed. I very much like shopping the world of Novica!