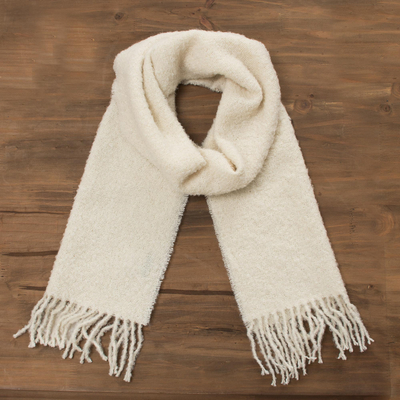 (107)
Add the delight of the Andes to your home with this wrap scarf from Peru.... more

Add the delight of the Andes to your home with this wrap scarf from Peru. Designed by Isidoro C'cahuantico, the warm scarf is woven of soft 100% alpaca wool, featuring a solid color in bone. Lovely fringes complete the scarf at each end.

A lovely, light weight warm wrap for the high desert where I live.

The weight is perfect for chilly evening, the colors are rich and go with dress wear or casual. Compliments everytime I wear it.

Love the Ruana but the packaging was simply a plastic envelope and it had been cut through by a razor package cutter (about 4 long). The ruana was wrapped in tissue which had also been cut through. Luckily I could not find any cuts on the beautiful weave. Im hoping it was not damaged!

I sent one to me stepdaughter and decided to get one for myself but in a different color. It s fantastic.

This ruana is so attractive and draws many, many complements from co-workers and friends. I have disc, claovered that wraps, shawls, ponchos and ruanas really suit the constant running between buildings and fluctuating room temperatures.

I bought this for my wife as a Christmas present. It was the hit of the day. She loves it, and when I can get her to give it up, I do too. Its beautiful!

You can find our 100% alpaca scarf 'Andean Delight in Bone' by Isidoro C'cahuantico in accessories categories such as Alpaca Scarves, Alpaca Wool Scarves and Wrap Scarves. Enjoy exploring these sections for other Novica treasures.

Isidoro C'cahuantico has received 2 microcredit loans with 0% interest from Kiva and Novica, the first for $2850 and the most recent for $2850. Proceeds were used to invest in the purchase of larger quantities of alpaca yarn to increase production.

"I became enamored with the textile arts at first sight... My curiosity led me into the world of textiles, looms and weaves."

Isidoro C'cahuantico Mendoza was born in 1954 in a village near Cuzco. During the 1970s, he was forced to migrate when terrorists swept his region. Accepting various jobs, he soon found himself working as a janitor in a textile factory.

"I was completely fascinated with the work they were doing!" Isidoro recalls. "I became enamored with the textile arts at first sight.

"At night, when everyone had gone home and I was left alone to sweep and clean, I began to look at the looms and machines and to experiment with them, just out of curiosity. Some days later, one of the weavers complained to the supervisor that his machine was never the way he'd left it the night before. The owner asked who kept adjusting the loom, and was surprised beyond belief to learn that the culprit was me!

"She asked me why I was using the loom, and I replied that I wanted to learn to weave. She said that if I really wanted to learn, I should learn to assemble one of the spare looms in the warehouse.

"That was one of the most important and memorable moments in my life! My curiosity led me into the world of textiles, looms, knits and weaves.

"That was the beginning of a vocation, a great gift that I have now also passed along to my children. My two older children work with me, weaving and knitting fine alpaca textiles, and my daughter does the best crochet work I have ever seen. I hope all of my four children eventually develop my same love and passion for weaving!

"I would like to assure you that every garment we create carries with it our creativity and hard work. Your appreciation for our work motivates us to continue perfecting our skills and our art!"
View all