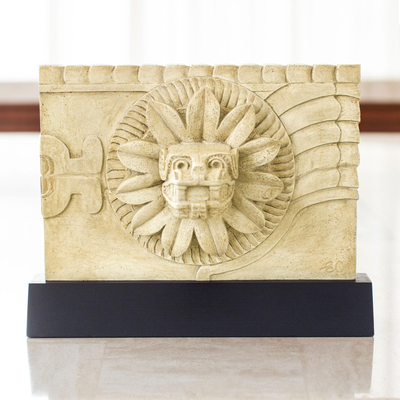 This awe-inspiring sculpture of Quetzalcoátl ("feathered serpent") celebrates the pre-Hispanic deity honored by Aztecs, Mayas, Tenochcas and Toltecs. Regarded as a god-ruler, Quetzalcoátl was related to gods of the wind, of dawn, of Venus, of merchants and of arts, crafts and knowledge. Elisa Camarena molds the revered deity with extraordinary precision and detail that is enhanced by high relief work. The signed piece stands on a pinewood base.

"Fantastic coasters for outdoor or indoor."

My wife and I love the Aztec coaster set. Expertly made, top quality work. Goes well with mixed drinks as too ;)

"A beautiful addition to my Mayan collection"

Everything I had hoped for. Its a lovely reproduction that isnt too big or small. Perfect to display on a desk or shelf. My one comment is that there is a line of clear glue visible along the base on one side. I was able to gently scrape it off but I would definitely inspect the pieces for that.

The packaging was great. Very detailed work, I am happy with my purchase.

We got two sets of the Mexican Sun Stone coasters today. They are extremely detailed and you can feel the quality. Put them in the living room and they dress up the end tables nicely. Don t take much room but add a feeling of class and attention to detail. I highly recommend this product and the artist!

"This will add to the artistic collecton in my home"

This item is quite beautiful.

artistic decor in my home.

I am very satisfied with stela, but I had over estimated its size. It is well made and the hieroglyphs are clear.

You can find our sculpture 'Quetzalcoatl' by Elisa Camarena in sculpture categories such as Aztec Sculpture, Archaeological Sculpture, Resin Sculpture and Wood Sculpture. Enjoy exploring these sections for other Novica treasures.

"My passion for pre-Hispanic art has led me to depict Mexico's essence in all its splendor in my work."

"I'm proud to be Mexican and be able to promote my culture through my creations.

"I was born in Irapuato on November 13, 1960, the daughter of Mexican parents. I studied architecture in Mexico and also in Quebec, Canada. My passion for pre-Hispanic art has led me to depict Mexico's essence in all its splendor in my work.

"I set up a workshop that continues to grow. We belong to COPARMEX -- the Mexican Employers' Association -- and also to the Mexican Association of Woman Business Leaders. Since 2006, I've served on the board of the COFOCE (Guanajuato World Trade Commission) in the area of gifts and handicrafts."

Elisa Camarena's designs have been exhibited in many Mexican venues, including the prestigious Museo Nacional de Antropología e Historia and the Museo del Templo Mayor, among other museums. They have also been displayed in major corporations and a number of universities.

She has been distinguished with the title "Guanajuato a la Calidad" since 2007.
View all