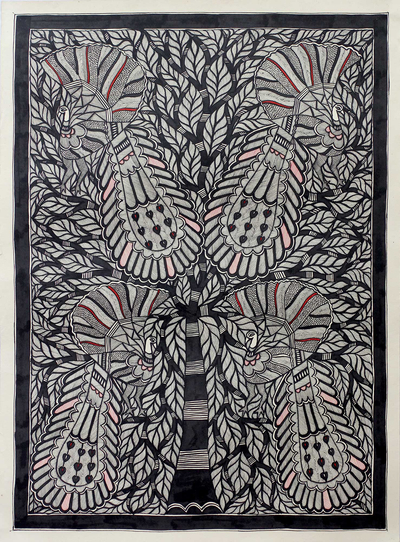 (2)
Bharti Dayal celebrates her love of nature in the ancient style of Madhubani... more

Bharti Dayal celebrates her love of nature in the ancient style of Madhubani painting. Dayal mixes vegetable dyes with acrylics to paint peacocks perched within the spreading branches of a great tree. Subtle touches of red and pink relieve the otherwise black and white composition. Traditionally painted by women from Mithila on the walls and floor of their homes, Madhubani paintings often depict ancient mythological themes.

Please note: Bharti Dayal signs her pieces on the back side.

"Tribal art at its best"

As an Indian, I can tell non Indians to buy these paintings and give your wall a new twist

To adorn your walls

"A Divine Work of Art"

This arrived well packaged and sooner than expected. I was delighted with the artwork. My thanks to the artist, Bharti Dayal and to Novica.

You can find our madhubani painting 'Love for Nature II' by Bharti Dayal in paintings categories such as Animal Themed Paintings, Leaf and Tree Paintings, Cultural Paintings, Expressionist Paintings and Madhubani Paintings. Enjoy exploring these sections for other Novica treasures.

Bharti has dedicated her life to the preservation of Madhubani painting. She is viewed as an authority in the field and has trained dozens of aspiring artists in this ancient style, many of whom are now able to earn a living through the practice of this art. In her own paintings, Bharti brings a contemporary intellectual edge to this ancient Indian folk art. She has received numerous awards for her paintings but the one she treasures most is the National Award for Excellence in Handicrafts, also known as the President's Award - it was her long-held dream to receive it.

"...it remains my ardent desire to win the National Award for excellence in handicrafts."

Born in December, 1961, I come from Samastipur in northern Bihar, a region corresponding the ancient kingdom of Mithila during in epic times. This region, bears high eminence in ancient Indian history, and preserves the rich heritage of folk paintings known as Mithila, or Madhubani paintings. As an artistically inclined girl, I learned this art form from the elders of my family. I would watch my mother and grandmother make alpana paintings, aesthetically inspiring auspicious designs with raw wet crushed rice on the floor of the houses, and sketch epic scenes on walls.

Madhubani paintings are a simplified manifestation of the philosophic underpinnings characteristic of Indian folk traditions. Ironically, the revival of this form of painting is linked to the deprivation of the Darbhanga district of Bihar during the affliction of terrible drought and famine in 1967. Folk paintings on paper, transposed from the walls which were decorated in houses of Mithila, were specifically promoted to save folks from dire starvation.

Today, Madhubani paintings are executed with natural vegetable dyes on handmade papers, and fabric colors on cotton and silk. My post-graduate degree in botany has helped me in identifying natural sources of colors from plants. I commenced my work on professional lines in 1984. Since 1991, I have stayed and worked in New Delhi. I sought to redress a deplorable practice that had seeped into the work of Madhubani painters. Most of them, scarcely educated, only replicated earlier works, even if the original piece was stricken with egregious flaws. While remaining true to our traditional roots, I sought to induce an intellectual edge into my paintings, thus lending them a more contemporary look. Today I have several associate Madhubani artists in Bihar with whom I work in unison to create unique works of art. No time frame can be given for the completion of a painting. It can be a whole day under the effect of inspiration, while others can linger on for months.

I have been decorating the Bihar Pavilion wall during the India International Trade Fair at New Delhi for the last seven years. As an index of appreciation for my paintings, I have sold over 2,100 paintings in the last ten years of my professional career. In March 1995, French Television made a documentary on my paintings that was subsequently shown on Discovery Channel. In 1991, I received a prestigious award from All India Fine Arts and Crafts for fifty years of art in independent India. I was selected for the 71st Annual Paintings competition of All India Fine Arts and Crafts in 1998 and for the 9th All India Fine Arts and Craft competition for traditional painting, 1999. I won the state Award for Kalamkari in Mithila painting titled for the year 2000-01. My painting, 'Eternal Music,' received the top award in Millennium Art competition from AIFAC for the year 2001.

I am also engaged in a research of my own wherein I intend to prove that a Mithila/ Madhubani painting is the fountainhead of much folk artistry in India and even abroad. While I wish to cater to art-lovers with paintings on classical themes with contemporary tempering, it remains my ardent desire to win the National Award for excellence in handicrafts. I have great hopes for widening the international exposure to my art. My ardent desire is to spread cosmic harmony among humankind through my work.

We at Novica wish to congratulate Bharti's triumphs during the time we have known her:

In 2000, when Bharti first joined us, she expressed a wish to win the National Award for excellence in handicrafts, also known as the President's Award. She made her dream come true in 2007.

Other accolades include the National Merit Award in 2002 and 2005. Between 2003 and 2006, her work was constantly displayed at the AIFAC (All India Fine Arts and Crafts Society). Her work competed among 500 entries nationwide, for which 30 to 40 are selected, thus becoming a prestigious event for an artist to be included in. Also, in 2002, one of her paintings was presented to Sehba Musharraf, wife of Pakistan's president at the time, Parvez Musharraf. In 2005, more of her paintings were selected to be displayed at the Prime Minister's office, as well as the Finance Ministry's office.
View all