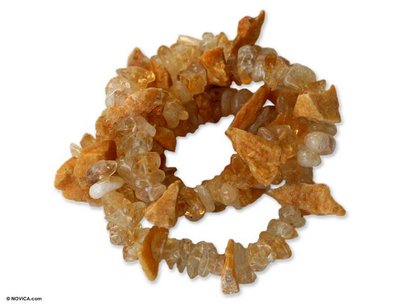 byWania Vaz
Evoking the sun itself, Wania Vaz creates a set of three bracelets to be worn... more

Evoking the sun itself, Wania Vaz creates a set of three bracelets to be worn together or separately. She combines lemon citrine with yellow calcite, showcasing the stones' natural beauty. The triple strands slip over the wrist.

You can find our citrine and calcite stretch bracelets 'Sun Trio' (set of 3) by Wania Vaz in jewelry categories such as Birthstone Bracelets, Gemstone Bracelets, Calcite Bracelets, Citrine Bracelets and Nylon Bracelets. Enjoy exploring these sections for other Novica treasures.

"I realized I was seduced and charmed by the gems..."

"I have always shown a talent for handcrafts and painting, but I had not explored fully this talent. Then, in 2002, I began to make jewelry after being encouraged by a friend who was opening a shop. I began making pieces with resin beads and gradually integrated stones into my designs. I realized I was seduced and charmed by the gems, so now they are my main prime materials. I felt something different when I manipulated the stones – I discovered there is really a force emanating from them.

"Eventually I began to sell my work amongst friends, then in shops and now, through Novica, on the Internet. My hobby became a small business in a most natural progression, bringing me great satisfaction and pride. I realize Novica is an excellent sponsor of an artist's work, for it reaches a broader, more receptive audience."