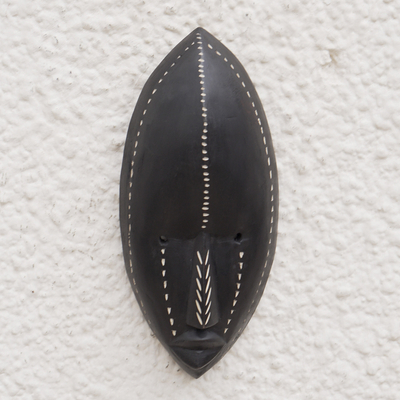 (9)
This intriguing mask by Gordon Adu is shaped like a coffee bean. Adorned with... more

This intriguing mask by Gordon Adu is shaped like a coffee bean. Adorned with tribal markings, it depicts a dancer from the Dan tribe of Côte d’Ivoire and parts of Liberia. Masks like this one are worn during festivities and also make an appearance for funeral rites.

"What a GREAT monkey carving!"

This monkey is absolutely Beautiful & is most Unique! A perfect addition to my Collection! Just Excellent! MZ

I bought this for a 50th wedding anniversary and vow renewal gift for a very special couple. I wanted something unique and meaningful. I was very excited to find these carvings online. When I opened the package I was shocked...and not in a good way. The painting is sloppy and the carving is nondescript. It looks NOTHING like the picture. You cant even tell that it is a heart they are holding. There is NO WAY I can give this to them as a gift. I would be mortified. It looks so cheap. I am SO DISAPPOINTED! I wish I could have given it zero stars. I have no idea how I am going to come up with another gift in such a short amount of time now.

The Love Struggle, Unique African Wood Sculpture of Man and Woman with Heart

This was a gift for my son and daughter in laws 5th anniversary. They both love the beauty and the uniqueness of it as much as I do! Couldnt have found a better gift anywhere!

This sculpture describes my struggles with relationship. To me it represents patience, true love and with communicating one can reach true happiness and love, the true struggles of relationships, is what this sculpture represents for me. Thank you for the wonderful hand craved piece. It is a special piece that compliments my collection .

The Love Struggle, Unique African Wood Sculpture of Man and Woman with Heart

Made a great gift! Crafted by a very talented artist.

"Eboney sculpture, "We Are One Shadow""

This item is absolutely beautiful and is beautifully crafted. Excellent work!

We Are One Shadow, Hand Crafted Abstract Wood Sculpture

You can find our dan wood mask 'Festive Dancer' by Gordon Adu in masks categories such as Wood Masks. Enjoy exploring these sections for other Novica treasures.

Gordon's eldest child is in trade school, one is in high school and two are in primary school. When Gordon was a child, he was unable to attend school due to his family's financial situation. He took small, untrained jobs here and there, and was never fulfilled by them. His mother suggested he travel to see his brother where he was taught the craft of carving. Through hard work and perseverance, Gordon became a very talented carver and made a promise to himself that he would do everything to support his children's education so they would not have to go through the same experiences.

Gordon was at one point uneducated and had no trade skills. After his brother taught him the craft of carving, he was able to turn his life around and make a living to support himself and his family. He feels extremely blessed and has since then empowered others to make a living from carving. Gordon has since been able to train several others who were in a situation similar to his, uneducated and unskilled. While he was training them, he even bought their meals because he knew this experience would help them. Since then, his assistants have started their own workshops and are able to provide for themselves. Gordon and his brother started a chain of transformation in their community that will have a lasting impact.

Gordon's income from NOVICA goes straight to necessities including utility bills, groceries for his family and his children's education. Increased income would allow him to continue to pay for his children's education as they start getting to the age of trade school and can train others so they can making a dignified living, too.

Gordon has four children - Agnes Adu, Gloria Adu, Blessing Duoduwaa, and Abigail Boaduwaa. He cares for and loves each of them deeply, vowing to ensure they will have a better life than he did.

Gordon Adu has received 7 microcredit loans with 0% interest from Kiva and Novica, the first for $400 and the most recent for $300. Proceeds were used to buy supplies for his craft business.

He took advantage of an offer from one of his older brothers, a carver, to help hone his latent talents.

“Five years ago, I joined NOVICA. Variety is one thing Novica has helped us to achieve in our works. NOVICA provides us with inspiration as to designing our pieces, and it has changed our line of work. I have expanded in scale greatly. I started selling carved pieces in Aburi, and I am still in Aburi, but in a well-furnished shop.

NOVICA has brought me a lot of successes. I have been able to build my own house where I live with my family. Funds that I receive from my NOVICA sales also help in taking care of the feeding and fees of my children.

“I have trained 5 artists. Two are family, and the others are students from the tertiary institution, who come in during vacation to learn. My happiest moment was when I received a micro-credit loan, which helped me to produce my replenishment. My goal is to work harder for my workshop to progress in NOVICA. Thank you!”

Born in 1974, Gordon Adu was unable to finish secondary school because of economic limitations, and thus fell back on his natural artistic inclinations. He took advantage of an offer from one of his older brothers, a carver, to help hone his latent talents. In eight months Adu had advanced greatly in the creation and finishing of wooden art.

Armed with talent and burgeoning experience, he moved to the city to seek new opportunities. After a while he returned to his home city and established his workshop there, receiving indispensable moral support from his brother.
View all