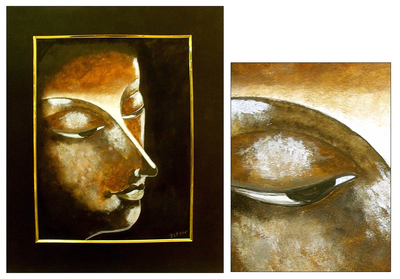 byJitinder
Buddha's countenance is radiant as he gazes into the distance. Working in... more

Buddha's countenance is radiant as he gazes into the distance. Working in watercolor, Jitinder captures the Master's mysticism and calm in a reverent work of art. He presents the painting in a passe partout of hard paper.

You can find our 'serenity I' by Jitinder in paintings categories such as Spiritual Paintings, Expressionist Paintings and Watercolor Paintings. Enjoy exploring these sections for other Novica treasures.

"The canvas becomes his world as he tries to depict all the things he loves most, all in vibrant colors of red, yellow, green and blue. 'I love collage!' he says!"

Sudha, Jintinder's mother shares with us how special and friendly her son is. "The canvas becomes his world as he tries to depict all the things he loves most, all in vibrant colors of red, yellow, green and blue. 'I love collage!' he says!

"Jitinder was born in 1982. He was a very affectionate and friendly child. However, he would often fall sick, which made him very irritable and he wanted attention all the time. Since childhood he was very fond of bright colors and wanted everyone to draw balloons, fishes, kites and flowers for him.

"At the time of birth, no abnormalities were discovered but within a few hours, jaundice was detected and he was put on photo therapy. He recovered gradually, however we did notice a developmental delay in him. When he was barely one and a half, he was faced with another medical problem, a seizure disorder. He was put on medication again. Later, when we got his mental abilities assessed, he was placed in the slow learner category. He started going to a special school at the age of four.

"Jitinder has always been fond of drawing and colors but he lacked hand-eye co-ordination, and therefore wanted others to draw. Once we decided to focus on this aspect, we could think of no better option but to use the medium of colors to his advantage. Presently he is attending a vocational center where he is involved in making paper bags, collage paintings etc.

"I was working as a banker and took an early retirement so that I could give more time to my son. My brother, who is an ex-banker, also assists him. He has been very helpful. I would say it is a team effort. We have been exhibiting Jitinder's work in different places and his work has been appreciated by many people.

He is a very enthusiastic person and, when not drawing, he enjoys music and playing sports. Everyone at home loves and pampers him. I am glad to be his mother. And I hope Novica will open new opportunities for my son."