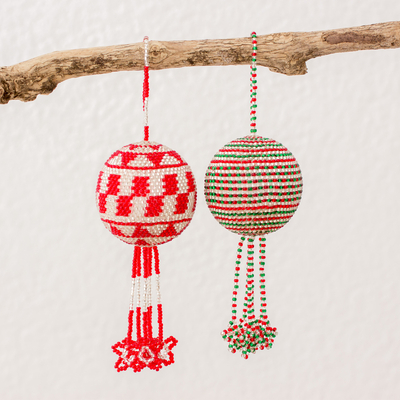 (1)
The Artisans of Panyebar Group consists of Guatemalan women who dream every day... more

The Artisans of Panyebar Group consists of Guatemalan women who dream every day of making a better future for their families and being part of the change that will teach and empower other women in their village. They craft a pair of colorful ornaments consisting of styrofoam spheres covered in glass beadwork. "Making these ornaments reminds us of the good times we spend with our families at Christmas time," states one of their members. Each red, green, or white bead needed for the checkerboard or lined patterns on these holiday decorations is strung by hand. Both orbs have a loop on top and several dangling beaded strands with figures in the shape of stars. Whether these ornaments hang from a tree branch, mantelpiece, or staircase banister, they're bound to add holiday cheer to your home.

These ornaments are so colorful and charming. The detailing with the designs is lovely. I am so very, very pleased with this purchase.

You can find our glass beaded ornaments 'Joyful Fiesta' (pair) by Artisans of Panyebar in holiday decor & ornaments categories such as Christmas Ornaments, Hand Beaded Ornaments and Glass Ornaments. Enjoy exploring these sections for other Novica treasures.

"With God's help, we pray this project will prosper. We're all excited! I've always believed in the angels that God places in our path."

The Artisans of Panyebar are a group of women artisans from a small Guatemalan village in San Juan la Laguna. The project began some years ago when one of the members was looking for work. Dominga, one of our founders, went to Panajachel where she met a friend. "It was a miracle," she says. He had just had the idea of working with seed beads, which Dominga had learned when she was a girl.

"He gave me a sample of a globe covered with beads but I was worried about how I could make an exact copy. I practiced and practiced until I was able to. I remember that I cried with excitement because, with this, I could teach the craft to other women. I was able to teach several mothers in the village.

"Two months after I received the sample, I delivered the order. I felt so excited! My friend checked every piece and most were approved. But a few were rejected. That brought me down but I made up my mind to improve our work until it was perfect.

"This was the beginning of the millions of blessings that came later. Some people from the US came to our village and they were the key to launch our grand project. We offered them our beadwork crafts and now they come every year to buy our designs in large quantities.

"We are very grateful to the people who connected us with Novica. With God's help, we pray this project will prosper. We're all excited! I've always believed in the angels that God places in our path."