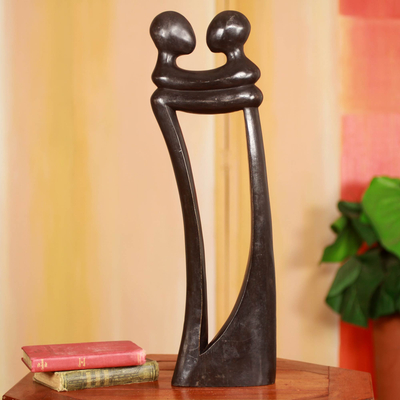 Placing hands on one another's shoulders, they affirm undying friendship. Mansion polish brings a lustrous glow to sese wood contours, masterfully carved by hand. Eddison Agbeko demonstrates both his talent and his design expertise in an elegant celebration of friendship.

I have a nice collection of African masks, and this one is my favorite. Beautiful carving and quite large in size.

This was an anniversary gift to friends. Knew them for 50+ years or so. As a 16 y/o worked with man as a lifeguard and maintained a friendship ever since. Met woman at same time as friend in 1969. They just received it and called me. Said it was beautiful, amazing,..and that they never saw anything like it. They were looking for a special place in their living room for it. Thanks Eddison Agbeko, for your great art work.

You can find our wood sculpture 'Always Friends' by Eddison Agbeko in sculpture categories such as Abstract Sculpture and Wood Sculpture. Enjoy exploring these sections for other Novica treasures.

Eddison Agbeko has received a $150 microcredit loan with 0% interest.

Agbeko's sculptures are a unique exposition of an emerging creative sculptural language. Sheer imagination is one of the foundations of the artist's creativity.

Eddison Agbeko was born in Ghana in September of 1964. He graduated with a bachelor's degree in chemistry in 1988. However, his great love for and talent in art led him to test the waters of sculpting, a fruitful turn of events for both the creator and his admirers. Agbeko's sculptures are a unique exposition of an emerging creative sculptural language. Sheer imagination is one of the foundations of the artist's creativity. We are all invited to a new dimension of the aesthetic combination of wood, kente cloth, strings, beads and sharp backgrounds to achieve a novel effect of rhythmic contrast.

The sculptor simply personifies extreme distortions of forms. We are forced to praise his uninhibited manipulation of contours, liberated from art's general principles. His forms also integrate traditional Ghanaian subjects and motifs as well as his individual response to contemporary life and present social and cultural circumstances. This approach is emotional as opposed to the purely academic. His images are basically inspired by the Ghanaian environment, but are altered in a way that becomes increasingly his own definition of forms. Agbeko uses a synthesis of realism and abstraction. When you perceive his sculpture, you are struck by the tension and the intense mood of physical and pure energy ultimately resolved in his remarkable sense of contortions.

Agbeko has a number of exhibitions and achievements to his credit. Between July 1990 and November 2000, Eddison participated in 18 exhibitions including the Pan African Fair for Arts and Music (Modern African Gallery, London), the Import Shop (Berlin) and the Spring Handicraft Exhibition (Washington, DC).

Agbeko won the first prize at the Chieftain Expo '92 dubbed "Art and Crafts as Tourist Product." He also prepared a 55-piece collection for the National Theatre building. Other institutional collections include the Volta Hotel, Mariset Plaza and Gold House (AGC), Securities Discount Ltd. and Fidelity Group.

Agbeko is married to his sweetheart Marcella and they have two children, a boy and a girl.