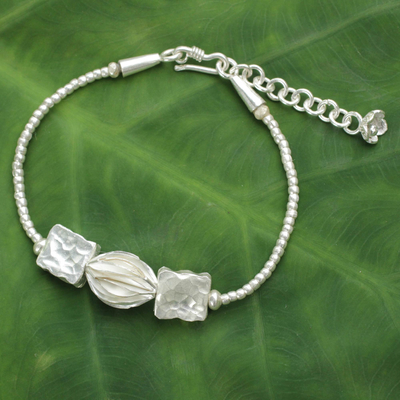 (15)
Combining tradition with modern day trends, the fabulous design of this bracelet... more

Combining tradition with modern day trends, the fabulous design of this bracelet is by Karen hill tribe artisan Aekkachai. He crafts the silver beads and pendants with traditional tools and techniques to craft a bracelet of exquisite elegance.

"Purchased these to wear to help stabilize heavier"

Nicely crafted after with pretty design for everyday anytime wear!

Love these earrings. Pretty, just the right size, and can wear with anything. Perfect!

I really like these cute little fish earrings. They came very quickly.

These are darling! Love the organic feel to them and the wire design is curved just right so they never slide out.

"These are very special little fishes"

Although these earrings are not goldfish, which is what I was seeking, they are so special that I could not resist purchasing them. They are very nice.

Aekkachai has received a $300 microcredit loan with 0% interest.

"One special feature of Karen silverware is that each family has unique details of their own. My family is expert in creating floral patterns and small animals."

"Hi, my full name is Aekkachai Damrongwongtrakun and I am from the Karen hill tribe. My parents told me that their original profession was shift cultivation, cutting forest trees, removing grass and cultivate – mostly planting rice. They would move to another piece of land if the soil wasn't fertile. Later, the government planned to build a dam in the village area so my parents, along with many villagers were evacuated, and they followed Khru Ba Wong, a famous Buddhist monk and highly respected among the hill tribes.

"They believed in his Buddhist teachings and followed the five precepts: abstain from taking life, abstain from stealing, abstain from sexual misconduct, abstain from false speech, and abstain from intoxicants causing heedlessness. We also refrained from eating meat and that's why the Karen tribal tradition of animal slaughter to respect the ancestral rites was abolished.

"When villagers migrated to Lee district in Lamphun, they found out they couldn't farm the land because it was mostly laterite soil. There were no fertile lands, and there were inadequate water resources. Even so, everyone believed in Khru Ba who intended to preserve the temple in the village in order to provide a sense of unity amongst the Buddhists. So the villagers worked together to repair the temple and then constructed their houses and roads.

"They spent all their savings during that period, and when money was running low they had to do to cheap labor work in the town, only earning 1-3 baht ($0.09) a day. So, some villagers dug and cut laterite to sell and to build the temple. Then Khru Ba asked the King to help the villagers so he gave some funds to buy equipment and paid for the labor to build the temple. He also suggested the villagers raise animals as a career however, since they do not eat meat they ignored this project.

"Some of the people who didn't follow Khru Ba and stayed behind traveled to Lee district to do some trading. Some would by clothes from Lamphun to sell in their hometown, and if they didn't have enough money to buy they would take their own silver jewelry, which had been passed down from their ancestors in order to exchange it for clothes and other necessities, or for cash.

"We found out old silver jewelries were popular among antiquarians. By the way, these antique silver jewelries had a very high cost and were starting to decrease in quantity, so we had the initiative to replicate antique silver designs making them more affordable. We started to craft with simple tools such as a hammer to flatten the silver plates, scissors for cutting and make the molding, and simple soldering tools. Then we took the silver jewelry to sell in the city, and it became famous.

"Later, the Government came over to support us by providing modern tools however, we still keep to the original process because every step must be done by hand and the silver cannot be mixed with other metals too much, because we need to maintain the soft texture of the silver, and keep it malleable.

"That is why Karen hill tribe silverware still contains a very high purity – no less than 95% silver purity.

"My parents were one of the families in this silver art. It has been passed down to me and my family. One special feature of Karen silverware is that each family has unique details of their own. My family is expert in creating floral patterns and small animals. We have the tools in various shapes that can't be found in the market because we make it ourselves. So when neighbors see the products, they can identify which family makes them.

"I have three children and my eldest son only graduated from grade 9, so I encouraged him to study English in order to communicate with the foreign customers who come to visit the village. My second daughter is studying at a Government secondary school. The Government supports the overall costs of studying.

"My youngest son is six years old and has a neurological disorder, he cannot speak or do anything by himself. So he needs to be taken care of like a baby. Every week I have to take him to see the doctor in Chiang Mai. The doctor and my neighbor always encourage and try to help me, and I will continue to look after him as best as I can.

"These days we are having some problems with making a profit from the products we make and sending them to Chiang Mai to be sold. Since profit is calculated on the weight of the product, not per piece or per item, whether it is an intricate design that needs more time to make or a simple one, the price range remains the same. Originally we bought the silver ourselves but now, the way things have changed, we decided to receive the pure silver from the shops to make their products and charge them for labor only, because pure silver is much more expensive than ever and we can't afford it.

"Sometime it's unreasonable because we can't ask for the price that we think we deserve. We lack the power to negotiate since we don't have enough funds to buy the pure silver ourselves. We are trying to find a way to sell our silverware, and we think that Novica is the best option for us.

"I hope that my products will be popular and of interest to you. Thank you."