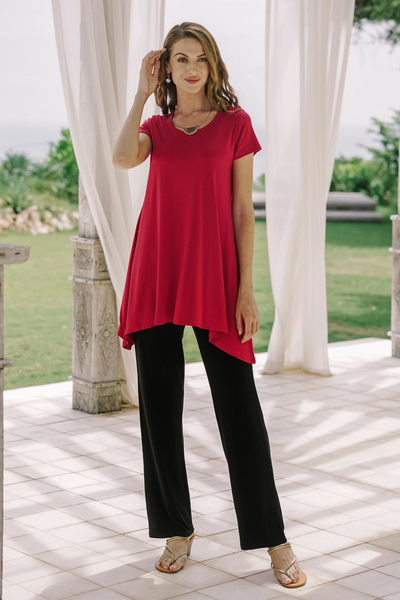 (13)
These classic, coal-black pants designed by artisan Janet Molloy in Bali are... more

This item is available for backorder and will ship within 3 to 4 weeks. Read more

This item is available for pre-order and will ship within 3 to 4 weeks. Read more

These classic, coal-black pants designed by artisan Janet Molloy in Bali are sure to be your new go-to for everyday wear. Crafted from soft, smooth modal and just a hint of spandex, the trousers feature a relaxed fit that will keep you comfortable and stylish.

Look more beautiful in person. So elegant, can?t wait to wear them for special occasion- would go well with black and gold. Would the artist have matching black pearls and gold necklace?

I love the look and feel of these modal pants. I have a feeling these will be my go-to pants for spring/summer days and nights.

I love the way the top falls on me- perfect to wear with leggings :)

Great to wear with leggings because of the length, and can be dressed with with a pretty necklace!

Calla in Green, Modal Tunic with Short Sleeves and Round Neck

I love tank and slip dresses, and have purchased many, including some high-end designer versions. This one from Novica is my favorite. It has the most flattering neckline, the fabric is stretchy and soft,but not clingy, it is comfortable and light and looks great. Thank you designer Janet Molloy for creating this simply elegant dress. Oh. And It packs up so small for travel, too.

Dress it up dress it down. Flattering

You can find our everyday comfort modal pants 'New Classic' by Janet Molloy in clothing categories such as Travel Friendly Pants and Modal Blend Pants. Enjoy exploring these sections for other Novica treasures.

"While other children played with toys, I preferred going to dad's office to play with colorful fabric swatches, which I eventually sewed into glamorous clothes for my dolls."

A deep emotional response to the myriad colors of the Universe has been the principal influence in Janet's life. She was born and raised in Melbourne, Australia, where her father specialized in luxury textiles and her mother was a fashion designer. Through these influences Janet extended her early love of color to fabric and design. "While other children played with toys, I preferred going to dad's office to play with colorful fabric swatches, which I eventually sewed into glamorous clothes for my dolls. By the time I was 12 years old, I was designing and making most of my own clothes," recalls Janet. Nobody was surprised when she refused to train as a teacher and began working instead at one of Australia's leading atelier of women's apparel.

Thanks to her father's international business connections she was introduced at an early age to the people and cuisines of many different countries. The vibrant colors of these new ingredients and flavors appealed to her as she helped her mother cook new dishes, which were very exotic in suburban Australia in the '50s. Janet expanded this passion when she became a professional chef and studied hotel management.

On her first visit to Bali in 1976, Janet felt an immediate affinity for the island and its people. Subsequent trips increased her appreciation of Bali's unique culture and culminated in her relocating permanently in 1988, when she married a Balinese man and had two children, Nino and Liliana.

"Bali has a reputation for unleashing people's creativity and, since settling here, I've become somewhat of an entrepreneur, with a handicrafts and a silver jewelry workshop, amongst others. My most recent venture is 'Goddess on the Go!' It's a collection of eco friendly travel and leisure clothing for women. As a frequent traveler, I've experienced the need for versatile, easy to launder clothing with simple lines that I could accessorize with my colorful gem-laden jewelry. The garments are designed to feel sensual but also be comfortable. Unable to locate such garments in Bali, I decided to go ahead and create such a collection for myself and other like-minded women."
View all