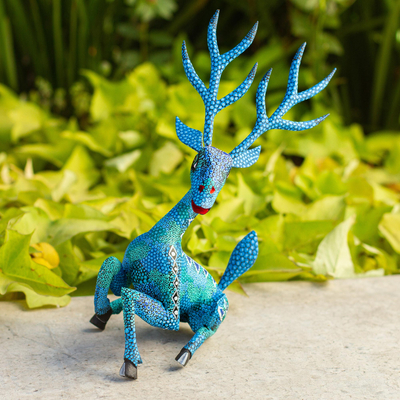 5.0 (artist rating)
Hand-carved of copal wood in the style of alebrije handicrafts, a beautiful deer... more

Hand-carved of copal wood in the style of alebrije handicrafts, a beautiful deer brings the beauty of Mexican folk art to your home. Artisan duo Zeny and Reyna create this sculpture, painting it by hand with intricate motifs in blue.

Alebrijes are a fairly recent Mexican art form, attributed to Pedro Linares. Unconscious due to illness in 1936, he was presumed near death and yet his dreams were extremely vivid. He tells of a place where all was peaceful and quiet until all of a sudden there appeared a lion with an eagle's head, a rooster with bull's horns and a donkey with butterfly wings. They kept screeching "alebrije, alebrije!" and Pedro began running away. He encountered a man who told him it was not yet his time to be there are and he should continue running towards the exit. In this dream Pedro climbed out of a window and regained consciousness.

You can find our wood alebrije sculpture 'Resting Deer' by Zeny and Reyna in sculpture categories such as Animal Themed Sculpture, Alebrije Sculpture, Hacienda Sculpture, Hand Painted Sculpture and Cultural Sculpture. Enjoy exploring these sections for other Novica treasures.

Zeny and Reyna has received 2 microcredit loans with 0% interest from Kiva and Novica, the first for $1200 and the most recent for $2500.

"When she told us this we felt a great sense of satisfaction, we had no idea how much we could help someone – a child – through our art."

"Hola! We're Zeny Fuentes and Reyna Piña, we are married and we're from a small town in Oaxaca," says Zeny by way of introduction. "We both come from families dedicated to carving and painting wood in a style known as alebrije. Our parents were master carvers and they taught each of us when we were little kids. We studied different things too, but what we really like to do is crafting alebrijes and continue with our families' traditions.

"I still recall the first piece I ever carved. It was a duck and it got sent to the Museum of Light in San Antonio! Since then I've had the good fortune to exhibit my work in different museums and galleries in the U.S. – the first one was in Arizona when I was only 14 years old. Now Reyna and I exhibit together, and some of our alebrijes are on show in Israel and in Germany.

"Our work has also been sponsored by a renowned Mexican stationary company, who transformed our wood sculptures into paper.

"Reyna and I have different styles when it comes to alebrijes, and when we got married we decided to combine our ideas, creating our own version: our artistic identity where color and sculpture have a specific meaning. You could say we conceived a life filled with colors and a love for nature as well as for our huge cultural heritage. And now we share our love for this art with our children, who will preserve their family legacy.

"What we have taken from our culture is that we left the trees and recovered our own life, which is evident in every finished sculpture.

"Our raw materials include reclaimed tree trunks and branches as well as roots from dead trees, or the ones that we find in fields and rivers. We use the dust that comes off after sanding a piece to fill in the cracks that a piece of wood may have, and we use the thorn of a maguey to paint the more delicate motifs. Each alebrije is crafted by hand.

"The government of Oaxaca and the Tourist Ministry have both recognized our work as and named us master wood artisans and for promoting this cultural art form across the borders. In 2012, we received an award during Mexico's National Exhibition of Artesanias (ENART) for our sculpture 'The Wild Bull of the Sun and Day.'

"We love spending our free time in the nearby fields and rivers and admiring nature while sitting atop a mountain or hill. This is reflected in the work that we do, which is special and authentic. Our inspiration comes from life's essential elements: the sun, the moon, the wind, water and fire, as well as the main symbols of our Zapotec culture. They are related to animals, flowers, insects, the cycle of life, and time.

"An event that had a big effect on us was when we were invited to teach our work to children with different capabilities in a school in Michigan. Among them was a boy who would not obey, wouldn't eat and wouldn't pay attention. Regardless, we began to teach and I started carving a log of wood into a bear, and this kid was amazed by the magic of transforming wood into an animal. I caught his attention and I helped him make a sponge from a block of floral foam.

"When he was finished, he looked quite content with himself. His mother later told us that, when he got home, he was in a very happy mood. He ate, and then drew a picture of me, calling me 'art boy.' Apparently the experience contributed to him coming out of his depression.

"When she told us this, we felt a great sense of satisfaction. We had no idea how much we could help someone – a child – through our art.

"We Look upon Novica as a door that opens the world where Reyna and I can show people our work. We would like to express our thanks to all of you who find interest in the wonderful world of Mexican alebrijes."

4 Testimonials for Zeny and Reyna

I got my coyote yesterday and really love it. It's very beautiful. Thanks so much!!

Thank you Zeny and Reyna. I bought the ""Playful Blue Kitten"" as a gift for a friend of mine. She loves it! The details are amazing the kitten's expression and pose just too precious. I have several Zeny and Reyna pieces myself, but always like to see what new items are offered. They make great gifts!

Hi Zeny and Reyna, Thank you for creating the perfect gift for me to give my son for Christmas! For personal reasons, my son appears as a lizard in some of my favorite artworks that I created. My son already has my favorite and I still have two of them (I am a fish in all three of the works). I gave my son an Indonesian lizard (for what it means to the people who created it -- as well as to me). Everything about YOUR lizard makes this one perfect for my son. My son is the one who introduced me to my favorite fish - Rainbow fish. My first two had been his fish. I now have many rainbow fish....so it was just too much fun to buy him a ""Rainbow Iguana""! The colors of this one is also perfect for his house. Great fun! I know he will love it. I also know the meaning of the symbols and will share that with him as well. I was happy to see that there was still one left. Hopefully, someone else will see my testimonial and just have to buy the last one. I have several of your pieces and was so happy to be able to find more here. Judy D. Lima, Oh