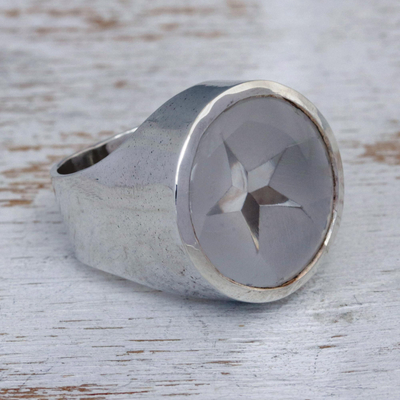 Telma Camargo de Araujo creates a spectacular design to showcase the star of Venus, believed to protect. The star is masterfully lapidated in clear quartz, a healing and romantic stone. It dazzles in a sterling silver ring.

My wife loved them

You can find our quartz cocktail ring 'Star of Venus' by Telma Camargo de Araujo in jewelry categories such as Star Rings, Birthstone Rings, Quartz Rings, Silver Rings and Sterling Silver Rings. Enjoy exploring these sections for other Novica treasures.

Telma Camargo de Araujo has received 2 microcredit loans with 0% interest from Kiva and Novica, the first for $200 and the most recent for $300.

"My work has become strongly influenced by the rich archaeological history of the Northwest of Brazil."

"I was born in Recife, Pernambuco and I attended the School of Fine Arts at the Federal University of Rio de Janeiro. For many years I worked in publicity and one day I discovered something on my beach – fashion and style. This is the manner that people show themselves to the world.

"In 1994 I began, instinctively, to paint symbolic figures on ceramic. Two years later, on vacation in Recife, I became familiar with the symbolism of prehistoric designs found in the caves of Paraiba, an archaeological site in Pernambuco. It amazed me so much! After this experience, my work has become strongly influenced by the rich archaeological history of the Northwest of Brazil.