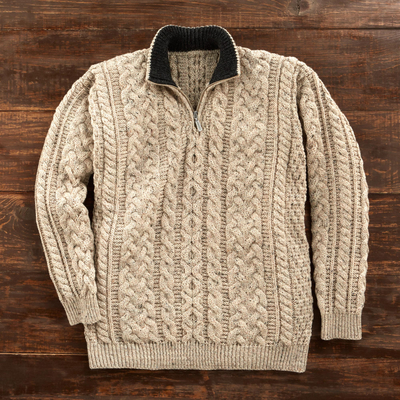 (421)
Although it might feel as old as Ireland itself, Aran knitting was actually... more

Ships Fast from the U.S.

This item is available for backorder and will ship within 2 to 4 weeks. Read more

This item is available for pre-order and will ship within 2 to 4 weeks. Read more

Although it might feel as old as Ireland itself, Aran knitting was actually developed at the turn of the 20th century by enterprising island women who traded stitches among themselves and earned extra income by selling their heavy, lanolin-rich jumpers to travelers. According to local lore, each Aran stitch symbolizes a different part of life on these rugged, remote islands. This classic men's sweater features the diamond trellis stitch, representing the fishing nets used by Aran fishermen, with alternating bands of the plait or braided cable stitch, thought to celebrate the closeness of family life. A zipper at the neck makes it easy to layer over a lighter-weight base.

Nice sweater however too large. Bigger problem was the $5.95 to ship to me but over $20 to return. Probably will not order from here again.

The sweater is knit nicely and is wool BUT very thin loose wool. A medium was HUGE and the loose knitting means it catches on absolutely everything and ends up with big pulls. Given it was so big and pulling constantly and relatively unusable as is I washed it hoping it would tighten up a bit and shrink a little. Washed on warm thinking might have to do it again as it was so big ....and now it will fit a doll. Live and learn probably should have just returned it.

"Perfect in every way"

My husband has skin cancer and cannnot go out without a hat. Bought him this hat fro Christmas. He has worn it every day since. He loves it, and I love it because it is so much nicer then a baseball cap or his old ugly straw hat. Beautifully made. Worth every penny.

Got this for my rugged British boyfriend who likes to fish but gets cold; he never had a nice wool sweater and would never wear a fancy sweater but as soon as he opened it he couldn t wait to try it on/wear it...he eso loves the patches and I even found a matching English cap! *even his Brit friend who never notices about his clothe s commented on how nice it is n inquired where we got it!

Bought this for my brother for xmas. He was very happy with his gift. Very good quality.

You can find our men's wool sweater 'Galway Pride' by NOVICA & National Geographic Travel Collection in clothing categories such as Travel Friendly Sweaters, Wool Sweaters and Pullovers Sweaters. Enjoy exploring these sections for other Novica treasures.