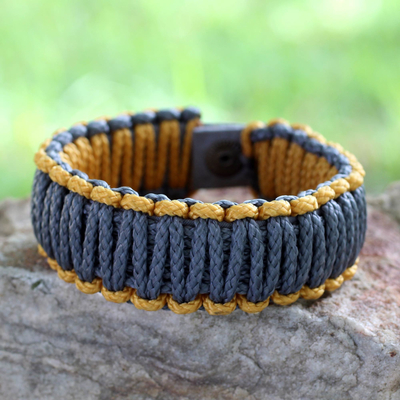 4.5 (artist rating)
Robert Aidoo-Taylor designs this bracelet in gray and gold in honor of Queen... more

Get it by Valentine's Day [more info]

Robert Aidoo-Taylor designs this bracelet in gray and gold in honor of Queen Amina of Hausaland. Born in 1533 in what is now known as Zaira, Nigeria, Amina was also a fierce warrior who ruled over 34 years. However, there are some who believe she was a legend and not an actual person. It is said that once when she was imprisoned she had been blindfolded and chained, sentenced to death by poison. Her executioner was given the poison in a cone-shaped bottle and was threatened with death should he spill any of it. He had to untie and remove the folds on Amina's eyes, but couldn't do so while holding the vile. When Amina was able to see how he was struggling, she told him to remove one of her bracelets and use it as a stand for the cone-shaped bottle. Upon realizing she had just saved his life, the executioner decided to help her escape rather than poison her.

You can find men's wristband bracelet 'Amina in Golden Gray' by Robert Aidoo-Taylor in jewelry categories such as Eco-Friendly Bracelets, No Stone Bracelets, Polyester Bracelets and Wristband Bracelets. Enjoy exploring these sections for other Novica treasures.

Robert Aidoo-Taylor has received 7 microcredit loans with 0% interest from Kiva and Novica, the first for $100 and the most recent for $750.

This Product is awarded the Earth Friendly badge because it uses recycled or sustainable materials or techniques.

"I am a self-taught artist. I never took any classes or attended courses... I enjoy working alone, and my inspiration comes from nature."

“A lot has changed since I joined this wonderful institution. I joined as a bracelet maker, but the kind of guidance I had from NOVICA helped me to widen my imagination. To a large extent, my finances have improved since joining NOVICA. In the beginning, even purchasing raw materials for production was an issue for me. NOVICA came to my aid right away with a micro-credit loan which I used for production of both new products and replenishment.

“As the years go by I have trained 8 artists, of which 5 are females and 3 are males. My talent has not just been polished; also my finances have seen a tremendous change. Over the years I have had a lot of successes; now I have platforms to showcase my talent.

“10 years from now, I want to start up a school to train young artists who can work in the arts industry in years to come.”

"My name is Robert Aidoo-Taylor, and I was born on December 30, 1967 in the central region of Ghana. I attended elementary and middle school in Ghana, and junior secondary school in Nigeria. I returned to Ghana to finish high school.

"I am a self-taught artist. I never took any classes or attended courses. I use manual tools to carve my pieces from wood and then I paint them myself. I enjoy working alone, and my inspiration comes from nature.

"The greatest challenge that I have faced in my life is when I wanted to further my education, but I couldn't afford to do so and had to struggle. I turned to carving as a profession and now I have exhibited my work abroad, including Berlin, Washington, D.C., and Detroit.

"I have taught others too, especially about making collage works with veneer woods and rattan weaving.

"One of my favorite things in life is to explore nature and spending time with my wife and two daughters. One of my dreams for the near future is to become an art lecturer, even though I was never able to go to art class myself."

In 2012, Robert ventures into the realm of handcrafted jewelry. "I explored the use of wood, waxed linen, synthetic cords and other media to make bangles, bracelets and necklaces. I have developed many designs so far, and I am so thrilled about this new venture! I have always used wood in my art and it's exciting to be able to add other materials to achieve something interesting."

We really like the ""Perfect Peace"" bracelet in green and black but the first time my husband wore it the black threads came out from under the green braiding and it is basically broken/not wearable. We will have to return it. Hope you can ensure this doesn't happen with your bracelets in the future and wishing you success.

I received your beautiful fan today and it is even more beautiful in person. It is very well made and I will display it nicely.

Received two woven bracelets today. Well crafted for the price but one of the bands was not as advertised . . . 8.5 inches instead of 8.75 inches.

Explore the world with NOVICA Journeys