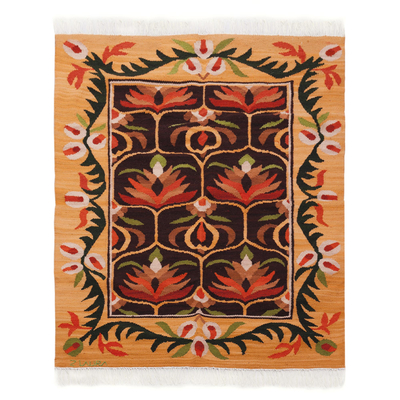 (31)
Against an ombre fade in orange, intricate nature-inspired motifs decorate this... more

Against an ombre fade in orange, intricate nature-inspired motifs decorate this wool area rug from Peru. Zosimo Laura carries on the artisanal traditions of his family as he hand-weaves this wool on a rustic wood floor loom. Lovely fringes accentuate this striking rug at each end.

"An amazing piece of textile art"

This tapestry is so exciting, so alive with color and warmth, and mesmerizing. The birds are exquisite, beautifully created. This fine art will be a prized addition to my home decor. In two words, its: happy making!

Size and material as promised, colors are not as bright and vivid as in the pictures unfortunately.

These are even more beautiful than pictured. The back zippers are completely hidden. The fabric is a rich, heavy wool, and the design is both sophisticated and stunning. Gorgeous!

I picked this rug online, but little did I know how beautiful it was until the rug arrived! In my opinion it is too nice to be on the floor.

Andean Magic is a gorgeous rug, colorful and very well made. I plan on using it as a table runner for my very large, rustic dining room table. Very happy!

This is a high quality product that I anticipate having in my home for many years to come. The colors are amazing!

You can find our wool area rug 'Nature of the Andes' (4x5) by Zosimo Laura in area rugs categories such as Hand Woven Area Rugs, Nature Area Rugs, Wool Area Rugs and Solids and Handloom Area Rugs. Enjoy exploring these sections for other Novica treasures.

Zosimo Laura has received 3 microcredit loans with 0% interest from Kiva and Novica, the first for $1000 and the most recent for $1450. Proceeds were used to purchase wool and cotton yarn for his tapestries and rugs.

This artist is currently supporting and providing for the education of their children, grandchildren, or children in their community, whether it be at the primary, secondary, or university level.

Like many other residents of Ayacucho, Zosimo Laura and his family were forced to abandon their homeland due to turmoil and violence.

Zosimo Laura was born in the department of Ayacucho, the capital of Peruvian handicrafts, on April 4, 1964. He comes from a respected family of weavers and, like his grandparents and brothers, he has learned the marvels of this art.

For Laura, his greatest inspiration is the pleasure his work produces in others. He intends to pass down the techniques used since ancient times by creating captivating products of superb quality.

Like many other residents of the Ayacucho countryside, Zosimo and his family were forced to abandon their homeland due to turmoil and violence. They moved to an urban center where they faced innumerable obstacles. However, Laura's dedication has allowed him to succeed in a new city. He says that soon he will teach his children the textile art, although they are still in school and too young to begin.

Zosimo utilizes alpaca, sheep wool, and cotton in the fabrication of his pieces, while both natural and synthetic dyes create the enthralling blend of colors. The two-pedaled loom is his primary tool.
View all