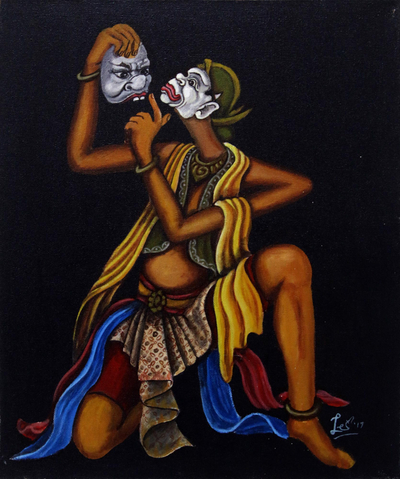 byTales Suparman
Wearing a topeng, or "mask," a man engages with another mask as he... more

Wearing a topeng, or "mask," a man engages with another mask as he performs the Beksan Bancak-Doyok, a traditional Javanese mask dance with a comical theme. In this freestyle oil on canvas painting from Tales Suparman, the Indonesian artist employs rich tones of brown, yellow, red, green, and blue to portray the masked dancer against a black background; the performer wears decorated batik cloth and a traditional headdress called a blangkon. The work suggests a surrealist influence, as the dancer appears with two elbows on his left arm, and depicts the duality of the characters of Bancak and Doyok, who usually appear in Indonesian theatrical performances as buffoons who are brothers.

You can find our 'doyok Dance' by Tales Suparman in paintings categories such as People and Portraits Paintings, Cultural Paintings, Surrealist Paintings, Modern and Freestyle Paintings and Oil Paintings. Enjoy exploring these sections for other Novica treasures.

“I was born in the eastern part of Yogyakarta, 50 years ago. My parents are only farmers who live modestly, and the five of us lived only from the farm. I am very lucky to have gone to a state school, because if it were a private school my parents would not have been able to send me.

“I studied at the Art Institute of Indonesia, majoring in fine arts, though finally I had to drop out because of lack of funds. I then worked, but my conscience rebelled because I did not like my job. I love everything related to art. So I stopped what I was doing and started to pursue the world of batik art. I faced many obstacles in starting a batik business, related to marketing and the processing of dye waste. Finally, I decided to pursue painting, and I became active in the community to generate sales and feedback.”
View all