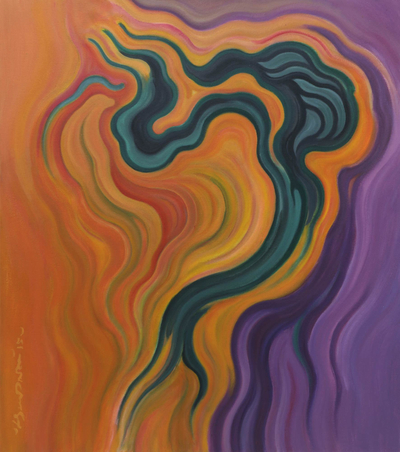 byHendarto
This expressive abstract composition is created by Hendarto of West Java.... more

This expressive abstract composition is created by Hendarto of West Java. Inspired by the lush environment of Bali, he titles the piece Aliran Pohon, which translates to "Flow of Tree." The imaginary tree is conjured by the artist's mind and creates a flow of creative energy in this resonating original painting.

“The city of Jogja has an ancient art and architectural tradition seen in its buildings, which is reflected in my paintings.”

“Hello, I’m Hendarto. I was born in Bandung, but spent my childhood all over Java because my father was a member of the Indonesian Air Force, living in Yogyakarta and Makassar.

“My family was large and happy. I was the fifth of nine children mostly raised by my mother after my father died on duty. With two brothers and six sisters, my home was always lively.

“I became interested in traditional batik art during junior high school. I would make puppets from thick cardboard and my friends liked them so much, they bought them from me. As a high school student, I would easily sneak in through a broken fence to the art institute next door. After talking to some students and faculty, I learned how to sketch. Afterwards, I enrolled as an architecture student at Gadjah Mada University.

“I came to a crossroads in my early 20s. I really wanted to pursue a career in art, even though my family was opposed because there was no financial support available and my younger sisters needed money to attend school. Despite my family’s disapproval, I went on to study art without any support. I frequently took many walks alone in the countryside and learn about people’s way of living. The city of Jogja has an ancient art and architectural tradition seen in its buildings, which are reflected in my paintings.

“Before my wife died, we had two children and I now have two grandchildren. My family is the main reason I paint. I use canvas, oil and acrylic in my creations. I hope Novica can help me expose my paintings to many people in other countries.”
View all