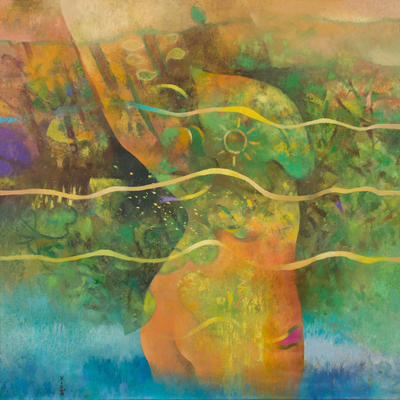 Signed Abstract Female Form Painting from Peru (2015), "From the Tops of the Clouds"

byKiro
Inspired by the natural beauty of a woman, Peruvian artist Kiro paints a... more

Inspired by the natural beauty of a woman, Peruvian artist Kiro paints a composition that is full of sensuality and elegance. Bathed by the golden glow of the sun, the form of a woman is wreathed in the tendrils of cloud tops. Kiro works in an abstract style that suggests the figures of his subjects with finesse.

Kiro says he considers his paintings to be “poems of color and abstraction” that take the viewer on a journey of imagination and feeling toward the transcendental.

Peruvian painter Kiro Sumerinde was born May 20 in the Puno region. A self-taught artist, his art portrays the Andean world of its birth. But Kiro’s work is not typically traditional. Rather, it specifically reflects his fascination with the great cosmology of the Andes. Very important in Kiro's painting is his notable use of line and color, presenting a novel yet very grounded perspective, both spectacular and intimate, with the artist's own spirit represented on some of his canvases.

Kiro experiments with innovative techniques, allowing him to achieve dramatic effects that combine the earthly and the cosmic with his Andean roots. Kiro says he considers his paintings to be “poems of color and abstraction” that take the viewer on a journey of imagination and feeling toward the transcendental.

Kiro's painting is an encounter of three-dimensional geometric forms to which he adds richly colored elements. Thus he creates an ambience of very personal characteristics. In his search for beauty, he achieves movement within a compositional equilibrium. His deeply colored forms are a spiritual message from the artist, who strides with firm steps through the essence of Andean culture to disperse it toward the infinity of space.

Kiro's compositions introduce the viewer to a universe of grand chromatism where architectural elements float. At first glance, his paintings may seem “strange.” But upon deeper analysis, they reveal the legacy of the Inca, Aztec and Maya, the modern descendents of the spirit of authentic cultures. Hills and green fields are transformed through the artist's pictorial magic.