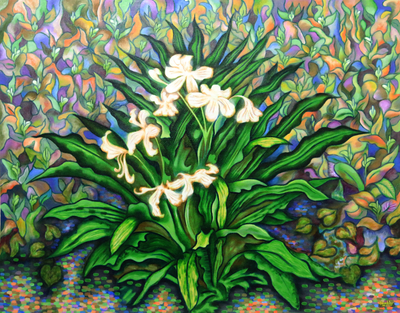 Painting from his home garden, Balinese artist Nyoman Tomblos creates a truly beautiful composition. Framed against fantastically colorful leaves, a group of white flowers grows from the ground. The artist paints in an otherworldly, expressionist style.

You can find our 'my Garden' by Nyoman Tomblos in paintings categories such as Floral Paintings, Nature Paintings, Expressionist Paintings and Acrylic Paintings. Enjoy exploring these sections for other Novica treasures.

An artist, according to Tomblos' imagination, is someone free to do anything and everything, uninhibited by the commands of others.

Nyoman Tomblos was born on June 12, 1970 in Bali. As a child he always wished to be a great artist who would travel all over the world. An artist, according to his imagination, is someone free to do anything and everything, uninhibited by the commands of others.

He began painting in 1990 as a self-taught artist. His initial theme was the Balinese rice field, as he elaborated images first on the walls of his home before opting for mixed media paints on paper and canvas. In 1993 Tomblos came under the tutelage of Arie Smit, a renowned artist, focusing especially on color and composition. His paintings have been exhibited throughout Bali.
View all