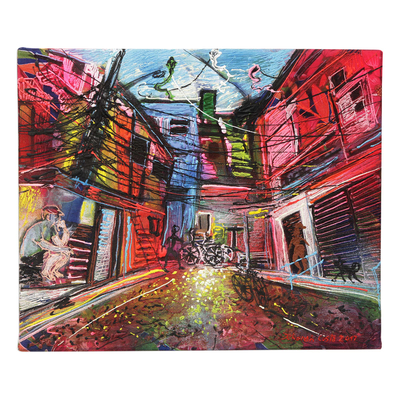 Signed Expressionist Painting of a Favela from Brazil, "Favela and Bike"

byDeborah Costa
Painting this scene from the streets of a Brazilian favela in Rio de Janeiro... more

Painting this scene from the streets of a Brazilian favela in Rio de Janeiro, Deborah Costa presents an eye-catching and enrapturing scene. She works with vibrant colors, using a mixed-media array on cotton blend fabric. Huddled beneath leaning, multicolored houses, a collection of bikes are featured in deep focus at the center of the painting.

You can find our 'favela and Bike' by Deborah Costa in paintings categories such as Cityscape Paintings, Expressionist Paintings and Mixed Media Paintings. Enjoy exploring these sections for other Novica treasures.

"I was born in 1951 in Rio de Janeiro and graduated with a degree in painting and fine arts from the Federal University Escola Nacional de Belas Artes. Later, I took a course in painting and metal engraving at Parque Lage School of Art.

"I started my career in the 1970s with drawings and photography. I had the encouragement and support of my father, who was a designer.

"My first works were presented at the VII Summer Salon / MAM and in an individual exhibition at the Arts Research Center, with offset assembly.

"I developed several other art techniques such as painting and engraving in metal.

"While accompanying a friend in a delicate period of her life, she ended up teaching me appliqué with fabrics. Some time later, I combined this technique with painting and drawing. Patch art is a very delicate work, and the cutting, gluing and sewing should be done very carefully.

"When watching the sea, I thought about how to reproduce such beauty in my work and satin fabric, with its shine and movement, gave me the solution. At the beginning, it was monochromatic but, soon afterward, I was applying some color.

"The favorite point in my work is that each new technique leads me to another expression.

"The light and the beauty of Rio's landscapes — the sun, the sea and the people — are a constant source of inspiration.

"Art is my livelihood and passion. Art is vital for me; it makes me happy, fulfilled." During ECO 92 — considered one of the biggest environmental events of the 20th century — the artist held an individual exhibition in the Petrobras cultural space titled "Terra: Natureza. She also held an individual show at Candido Mendes and participated in a collective exhibit at the headquarters of the United Nations in New York City.

"By combining various techniques, I developed standards in fabrics with application of cutouts, seams and assemblies and held the individual exhibition "Renascer" in the Municipal Secretary of Culture of Niteroi as well as an individual show named "Standards" at the State University of Rio de Janeiro. I've also participated in other exhibits throughout Brazil."