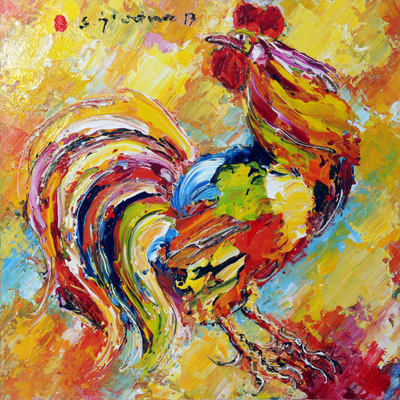 Signed Expressionist Painting of a Rooster (2017) from Bali, "Fighter I"

byWayan Suarjiwatman
Standing tall and proud with its head cocked to the side, a majestic rooster... more

Standing tall and proud with its head cocked to the side, a majestic rooster fills the canvas in this impressive painting by Bali's Wayan Suarjiwatman. He carries on the artistic spirit of his grandmother, capturing the rooster with bold strokes of the palette knife that create a kaleidoscopic, colorful composition in the expressionist style. Let this original painting bring majesty and beauty to your home.

You can find our 'fighter I' (2017) by Wayan Suarjiwatman in paintings categories such as Animal Themed Paintings, Expressionist Paintings and Acrylic Paintings. Enjoy exploring these sections for other Novica treasures.

He inherited his ability from his grandmother, a famous painter in her own time.

Wayan Suarjiwatman was born in the Gianyar regency of Bali on August 18, 1974. When he was only two years old he loved making sketches on his neighbor's wall and drawing puppets. After graduating from Junior High School, he continued to SMSR Ubud where he studied traditional painting for four years. Also he learned much by studying the works of senior Balinese painters. At STSI College of Art he focused on a modern painting style.

Suarjiwatman strives to be a diversified artist, taking interest in varied activities such as dancing, playing music, theater, and painting. He inherited his ability from his grandmother, a famous painter in her own time. Currently, he is dedicated only to painting. He lives in a small studio along with about 200 of his paintings. He comes from a humble background, as his parents are farmers and practice a simpler way of life.

In 1998, Suarjiwatman received a prize from STSI Denpasar College of Art as the best painter. He has participated in many exhibitions in Indonesia as well as a collective show in Australia in 1993.
View all