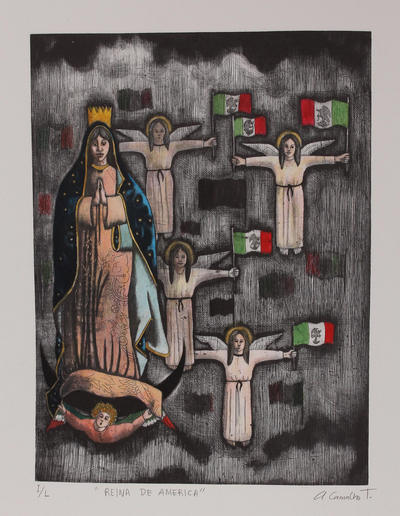 Inspired by Christian themes, Mexican artist Alejandro Camacho creates this modern composition. Mother Mary is depicted at the left, surrounded by angels that carry Mexican flags. The artist works in a traditional printmaking technique, etching the composition into resin before applying it with ink. Contemporary Graphics Studio presents this fascinating addition to any home.

You can find our 'queen of America' by Contemporary Graphics Studio in paintings categories such as People and Portraits Paintings, Christian Paintings, Religious Paintings, Angel Paintings and Modern and Freestyle Paintings. Enjoy exploring these sections for other Novica treasures.

"Many artists working at the same time in the same space result in an opportunity to share culture, art and knowledge of our medium."

"Mexico's Contemporary Graphics Studio is an independent workshop formed in 1996 near the city of Guadalajara. Its goal is to promote the works of different artists whose art converges on the same technique, with a high degree of precision in chalcographic engravings.

"At the beginning, it was a bit difficult to organize this project due to the kinds of demands in the art market. But as time went by, the workshop was able to transform itself into one of the best and best known in the area.

"In Mexico, engravings have become more popular thanks to countless artists who worked with this technique, such as Jose Guadalupe Posada, Leopoldo Mendez, Chavez Morado, Alfredo Salce and Francisco Toledo, among others, They have served as a base from which to influence many, many others in diverse artistic currents.

"We care a great deal about the technique but also about the printing. Each artist and each engraving is important. Alejandro Camacho, owner of the workshop, is in charge of organizing and of covering the requirements of the artists. His brother, Francisco Camacho, and Raul Maravilla are in charge of the printing. We use 100% cotton paper and offset inks for the technical part. Each artist has his or her own tools, such as polishers, metal tips, chisels and gouges. Acids and salts are also used that eat away certain parts of the engraving plates.

"In the case of the chalcographic prints, we use different kinds of metal — copper, aluminum, zinc and iron. For xylography, we use plywood, MDF and linoleum. In the case of the lithograph, we use calcareous stones and re-grained zinc sheets.