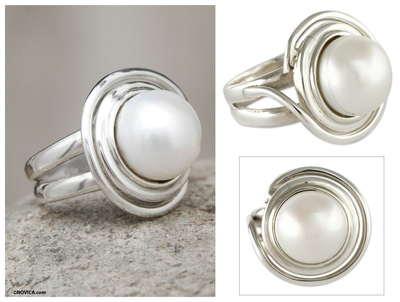 (12)
Sterling silver halos surround an iridescent pearl in a ring of exquisite... more

Sterling silver halos surround an iridescent pearl in a ring of exquisite elegance. Roberta Benzi creates the original design of this handcrafted ring.

I love this piece of jewelry... It has become my favorite, I wear it almost always!

I bought these earrings as a present because their unusual geometry was just the style my friend likes. They are not as dark as in the picture, but of a regular silver colour. The only disappointment was that when on the ear, they point downward, due to which I almost returned them, but my friend was able to tilt the posts a bit and they sit better now, though still not perfectly as in the picture.

I went back and forth on whether or not to buy this ring. I liked the setting and the shape of the stone but I wasnâ€™t sure about the color of the stone. Once I put it on my concerns vanished. Iâ€™m very happy with this ring! He who hesitates, etc...

One spiral to many.

"Color goes with everything!"

I like this ring because no matter my attire, it matches! Makes for a very quick decision when dressing for work!

This is the ring I've been searching for. It has weight and substance and it is so easy to wear. It's beautiful in an understated way. Bravo, Roberta, and thank you for sharing your artistic gifts with the world.

"During all this time I kept up my fight for minorities' rights, especially after making the sound decision of going through gender reassignment."

"Ever since I was a little girl I have always been very creative. I design jewelry, I paint, embroider, create original designs in fused glass and I'm passionate about restoring antique pieces.I was born in 1965 in the Bolivian department of La Paz to what I'd say was a family proper of that era. Dad, a mechanical engineer, was of Italian origin. He was a hard working and determined person. Mom represented Bolivia when she became Miss Bolivia.

"I modeled in my teenage years and I studied communication science, however I started having some problems with society so I had to leave my studies. Fortunately, I was invited to Santiago de Chile where I was able to finish my studies, and I also had the chance to study locution and theater.

"Upon my return to Bolivia I came to face with the fact that though I have an innate talent for working in media and have studied and trained in the field of communications, people weren't prepared for an assertive woman such as myself, who was gaining strength in her quest for social justice and the recognition of any human being regardless of circumstance, shape or form.

"Realizing the doors to a career in communications were closed, I decided to make the most of what I had learned from a course in fashion design that I had once taken. I experimented in different areas until I found the one I enjoyed the most, designing jewelry. I also opened a bridal studio, where I designed wedding gowns and jewelry for over 100 brides during the 12 years I had it.

"During all this time I kept up my fight for minorities' rights, especially after making the sound decision of going through gender reassignment. I had always felt that I was born with a body that wasn't really my own, different to the way I felt. My quest succeeded in amending the law whereby people can change their name after gender reassignment, and Bolivia became one of the first countries in Latin America to pass this law, thanks to the tireless work of anonymous heroes.

"After my parents passed away I was feeling somewhat tired of fighting for social and political justice and of the negative attitudes of the society. I decided to travel for a while and visit my sister and other relatives. That's how I arrived in Lima, a city that captured me with its architecture, the sea, and I was also welcomed by my relatives and friends.

"Curious by nature, I decided to specialize in jewelry production and took courses that taught me from how to select the right metals and melt them, to working with gemstones. This opened my mind to follow a never ending dream thanks to the versatility afforded by jewelry.

"Making jewelry allows me to transmit my strength and courage. My one true and constant companion throughout my life and struggles is jewelry – it is a part of me, and it allows me the freedom to express my feelings.

"People would say I'm determined, sweet and fierce because I've known how to raise my voice when needed. I have participated in political activities advocating women's rights.

"My family and friends have said about me that I'm a woman who fights for what she believes in, and is very creative. They know that in me they have a true friend and companion."
View all