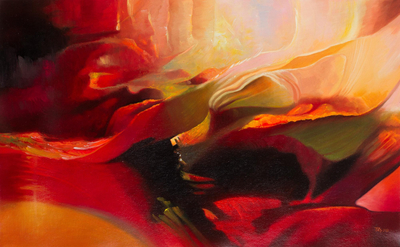 (1)
This gorgeous acrylic on canvas painting is from Patricia Figallo in Peru. The... more

This gorgeous acrylic on canvas painting is from Patricia Figallo in Peru. The artist creates an original abstract composition in fiery reds and golds. The flame-like forms seem to wild and powerful to be contained by the canvas.

After enjoying this beautiful painting for 13 years I just realized that I had not written a review; very meaningful, great painting. Thank you Patty and Novica!

"I still have much to do with my art."

Born on August 4, 1954, Patricia Figallo learned drawing and painting techniques from her husband, Francisco Cienfuegos, a Novica featured artist. In addition to handicrafts such as knitting and toy making, she practiced her art only part-time until 1999 when she immersed herself fully. Her art is an expression of her feelings.

Also an accomplished poet, Figallo has won awards for her verses from Lima's Colegio Nuevo Mundo in 2001 and 2002.

She expresses her Inca heritage through oils on canvas, showing the world the wonderful achievements of her ancestors. A challenge for the artist is to mount an exhibition of her works in the capital, and she is currently working to organize a collective exhibit in the Presidential Palace, scheduled for the end of 2003. Her perseverance and dedication have helped her make this a reality, in the same way she has achieved each goal she sets for herself.

"I still have much to do with my art," Figallo says. "I want to paint a series based on pre-Hispanic compositions."