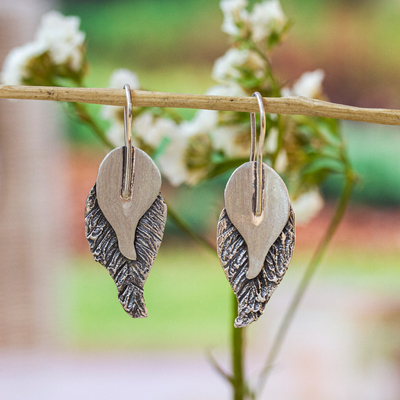 I love lapis and this ring truly does it justice. I have had so many compliments, too. Beautiful craftsmanship....I can always count on NOVICA!

Beautiful combo of blue and silver.

I just bought this for myself with some holiday money. It is gorgeous and I got compliments the first time that I wore it. I have small fingers but it still looked great. It easily goes up to my middle knuckle but is quite comfortable. The silver is beautifully made and the stone is lovely with a small inclusion that adds to the mystery of amber. I love this ring and this is my 3rd piece by this artist. I would highly recommend everything that she makes.

Midnight Mirror, obsidian button earrings fit perfectly on the ear to be noticeable. Have very slight drop off my earlobe. Bought to match the necklace and ring with same name/designer from Novica. Beautiful, classical quality look. Happy with purchase.

"Love it! My new favorite ring!"

I got my honey sea ring today and just love it. Very good quality and just what I expected. I will be ordering more jewelry!

Midnight Mirror, obsidian ring has a modern, refined clean line design that is in excellent proportion. Fits the finger very well, giving an eye-catching look that has the appearance of having a special quality. The photo does not do the ring justice. I also bought the Midnight Mirror obsidian pendant necklace...goes well worn together. Wish there were Midnight Mirrors to complete the set. Love the purchase.

Midnight Mirror obsidian pendant necklace has a setting that sets-off the stone to good effect. The photo does not do it justice. The fit is perfect. The chain places the obsidian in a high position which adds to the appearance of the artistic design, making the obsidian stone and setting eye-catching.The chain has a design that is well coordinated with the pendant. The silver has a high shine finish. The necklace and ring of the same name looks good worn together. Happy to have bought the ring and pendant. Hopefully, the Midnight Mirror earring will comeback.

You can find our sterling silver drop earrings 'Ode to Nature' by Olga Hinojosa in jewelry categories such as Leaf and Tree Earrings, No Stone Earrings, Silver Earrings, Sterling Silver Earrings and Drop Earrings. Enjoy exploring these sections for other Novica treasures.

Olga Hinojosa has received 2 microcredit loans with 0% interest from Kiva and Novica, the first for $700 and the most recent for $500. Proceeds were used to invest in a bulk purchase of silver and gemstones.

This artist shows a lot of talent or potential and is in their late teens or twenties.

...Hinojosa has come to treasure her unique skills and craft more than ever.

“I have been working hand-in-hand with NOVICA for several years. These marvelous years have allowed me to grow and create beautiful designs full of meaning.

“As a designer, I have always looked to grow more and bring my work to the best places possible. NOVICA has offered me the most satisfaction and tranquility. I have managed to share my designs in foreign countries through NOVICA. I believe that having your work appreciated is the most satisfying thing as an artist.

“My goal has always been to preserve the silver traditions of Mexico, along with its beautiful techniques, such as lost-wax casting and laminate. Seeing a piece melted down, ready to be molded, is very satisfying.

“In these years, I have been allowed to exhibit my pieces in various museums. Aside from that, the most important thing for me is creating a unique piece filled with emotion.

“Through this adventure, we employ three families who are in charge of the melting, chiseling, and detailing processes so that each piece is of the best quality. One thing that I have learned is that it is important to value what you do and how you do it. This is what you imbue in each thing that you do, and it shows.

“My primary success is through relying on the people with whom I began this adventure, including my clients, who give me the opportunity to continue showing my designs. With NOVICA, I am in good company with an enormous journey ahead.”

Olga Hinojosa began designing and making silver jewelry in 1970. She studied at the Talleres de Artes Plásticas y Artesanías at the Instituto Mexicano del Seguro Social. She has also studied in specialized workshops in various cities throughout Mexico. The artist has exhibited her work since 1972 in Mexico City, Washington D.C., Venezuela, Canada and Germany, among other countries. In 1984, she began to teach her trade and open workshops for production. Hinojosa became successful at commercializing her products through her own stores, but she decided to close them down a few years ago to dedicate herself to her workshops and have more time to teach her skill and create new designs. Since then, Hinojosa has come to treasure her unique skills and craft more than ever.
View all